This time Chromie has trapped an enemy of time. Try and prove yourself in the World boss event Crokolisk Bunbee, the famous alligator tamer!

Our patron Chromie is on a mission. She has discovered an invasion of the timeline and needs your help to fight the invaders in an upcoming server event. So bring your strongest weapons and best armor to aid her in her fight! Chromie has identified an agent of time and its servants. She can make a servant visible for you and your party, or you can bring a whole raid and fight the agent alongside their servants with up to 40 players. This is a multi-raid scale Worldboss event vs Crokolisk Bunbee.

See who had the best tactics and defeated the enemies of time on the highest difficulties.

If you have taken part in a worldboss event in the past and they felt too easy to you, fear not! We have re-tuned the fights to be doable on entry levels and still provide a challenge on the higher difficulty settings. 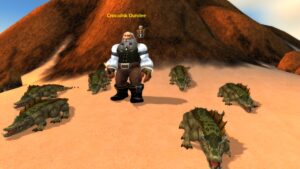