Recruit a Friend is available now! 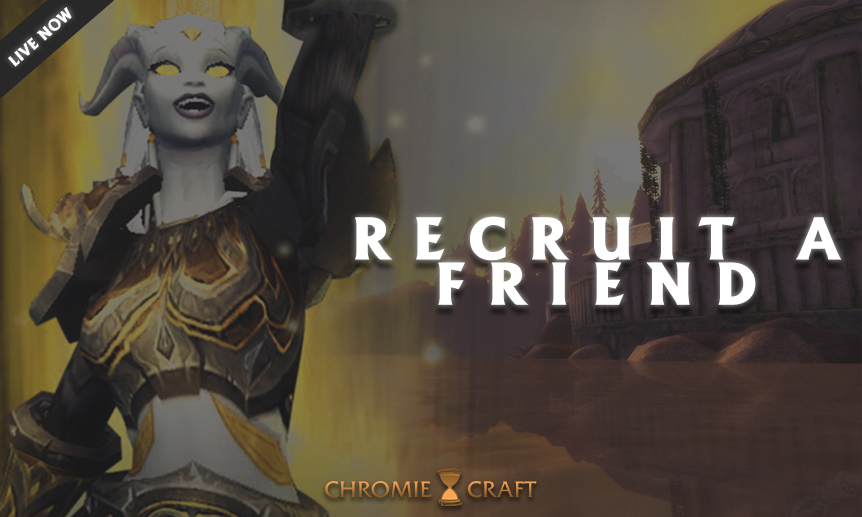 Type .raf in the game to get to know your account ID number for the Recruit-a-Friend feature. You can also see the number from the website. It is listed as “Personal Recruit Code” there. Give it to your friends so they can list you as their recruiter.

You’re not allowed to recruit your own accounts/accounts playing on the same IP.

Once you have the account ID number from your friend, go to the account administration page. If you do not have an account already, create one now.

Existing accounts can enable Recruit-a-Friend until 7 days after creation.

Enter your Recruiters account ID number and activate Recruit-a-Friend. The decision to choose a recruiter is final. There is no way to change the decision. The link will expire after 30 days or when the recruit types “.raf unbind”.

Benefits for the recruit

Recruited accounts will gain a permanent rested bonus on all characters until one character reaches the target level of 55. After 30 days the Recruit-A-Friend link will expire automatically if the owner of the account has not reached level 55 yet. There is no reward for the recruiter if the link expires.

Also, your recruiter can summon you with all their characters. That is, whenever both of you are outside of combat and either in Kalimdor or the Eastern Kingdoms, not in a dungeon or other map.

Benefits for the recruiter

As soon as one of your recruits reaches the target level of 55, you as the recruiter will gain a reward. These rewards range from cosmetics to bags and consumables. There are 3 unique pets available from Recruit-a-Friend, which can not be obtained in any other way. Not even from ChromiePoints. One of the rewards is sent to the Recruiter’s oldest character per recruit reaching the goal in a fixed order.

It was said before: As a recruiter, one can summon their recruit while not in dungeons and also not in combat. Just type “.raf summon” and add your recruit’s character’s name.

You’re not allowed to recruit your own accounts. If a friend and you make a new account each, you can recruit theirs and they can recruit yours. You can also recruit a friend’s alt account. But it is not allowed and not possible to recruit accounts with the same IP. Trying to do so will result in fully automated kicks and possibly account suspensions and/or closures. We’re aware that this excludes VPN users, families, roommates, dorms, and possibly others from using the feature, but it is necessary to prevent abuse.