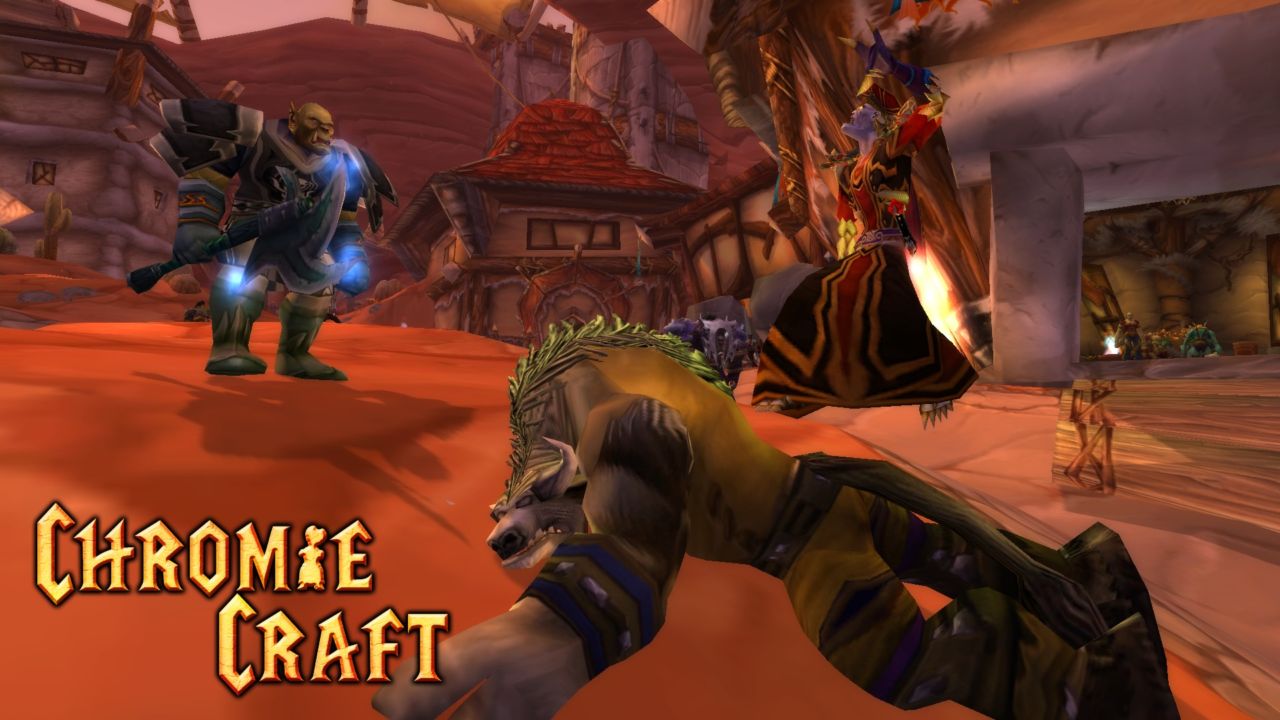 ChromieCraft is a RP-PvE realm where no player should be forced into any kind of world PvP – unless they want to. While we stand by this guideline, we would also like to encourage players to do so. First things first, none of the following features is going to impact any player who does not intend to participate. Besides seeing some announcements, the event is not going to interfere with them in any way. They will not even be able to see the participants.

The Boathwrightes originate from a clan of military geniuses. From their ranks, the world has seen relentless mercenaries, military staff officers, and flawless weapon- and armor creators among other achievements. There are also unconfirmed rumors about their Arena hosting services.

We proudly present you with a totally new feature, written from scratch for ChromieCraft.  The Brutal Brawl Tournament is going to happen twice per week, every Saturday at 12.00 and 20.00 server time. 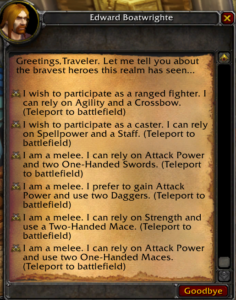 Honey Boathwrighte is residing in between Boomstick Imports and the Auction House in Orgrimmar and to the side of Pestle’s Apothecary in the Trade District of Stormwind. She can teach you the basic rules of the Brutal Brawl, as well as the outcome of the recent tournaments, and will be available all day long in this place. Honey also offers unique transmog appearances which are only available from participating in the tournament. Further details are below.

Edward Boathwrighte is available only while the tournament is happening.  His location is next to Honey Boatwrighte. He will also be capable of telling the basic rules of the tournament and allow players to join in on the fun.

How does it work?

When selecting one of the ‘Teleport to battlefield’ options, players will be immediately teleported to a random spot in one of the zones where the Brawl is happening. These are Loch Modan, Wetlands, and Badlands. The more players join the tournament, the more zones are going to be available, so all zones feel similarly populated. Initially, only Loch Modan is going to be available. Activation and de-activation of zones are going to be announced to all participating players in the chat. Most importantly, all participants will have FFA PvP enabled for the whole duration of the tournament. All buffs will be dispelled upon entry, the same as when entering an arena. Your party is disbanded and you can not join another party for the duration of the tournament.

What should I do?

Once arrived at the battlefield, players will immediately turn their attention to action. The Brawl Area is full of foreign creatures. These are your first goal. Killing a creature will award score. And score is what you really desire in this Brawl. Naturally, players will be able to fight each other. A PvP kill will result in 20 scores being added to your account and the dead player losing 10. Scores are shared equally between all nearby players when a PvP kill happens. For creep kills, only the killing blow counts. Note that all creatures have a 30-second soft enrage timer.

Every 10 minutes, all player’s locations will be shuffled, teleporting everyone to a random spot and sorting them into phases. This serves to ensure a somewhat equal population everywhere and everyone fighting enemies of similar strength towards the end of the Brawl. The total duration is 30 minutes per brawl. The player with the highest score is going to be announced the winner.

You don’t want to participate anymore? Just use your Hearthstone and you’re removed from the tournament. Going out of bounds will force a teleport to a random location inside the tournament area within a few seconds and also punish the player by setting their hp to 1. If a zone was just locked, players being forced to teleport, will not suffer the 1 hp penalty.

Once players reach a high enough score, their rank is going to increase. The highest rank they can obtain is rank 10. With each new rank, players will unlock buffs to make them stronger and will also receive items of unimaginable quality. These buffs will be removed when the tournament ends alongside the items. They are way too powerful to allow them to be worn outside the Brawl. The obtained items depend on a player’s choice when they are teleported to the battlefield. Each player can receive a trinket, a ring, and a neck. Ranged fighters receive a crossbow, Casters get a staff, and Melees either get two one-handed swords, daggers, maces, or a two-handed mace. When a player obtains a weapon from the brawl, they will also be allowed to keep the transmog appearance of said weapon in their collection. 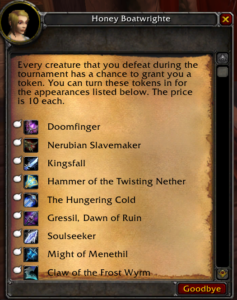 Every NPC that you kill during the tournament has a 10% chance to grant you a token. These tokens can be turned in at Honey Boathwrighte to obtain the transmog appearances from most of the weapons in the vanilla version of Naxxramas. The price per appearance is 10 tokens. Talk to Honey Boathwrighte in Stormwind or Orgrimmar to get to know your available amount. Tokens are counted on a per-character base while of course, all obtained transmog appearances keep being account-wide.

To allow for a more enjoyable PvP experience and to provide a unique experience, some select spells are locked to discourage playing healers or tanks. All of them are way down in the healer/tank talent trees or marginally relevant for non-tank/healer specs:

We hope that this brand-new game mode will meet your expectations and provide a challenging yet pleasant experience. We’re looking forward to your feedback in a discussion on our GitHub repository.